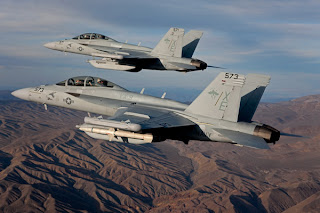 
“You are always going to have to go in and bag that system electronically before you do anything else. As you know, for the last several years we have very much wanted to take on the broader electronic attack mission. The first Growler squadron in Iraq recovered from the combat mission [there, and] 47-hrs. later they launched a combat mission on a Libyan air base.
That’s pretty extraordinary in terms of agility. That’s why we’re investing in Growler. Electronic attack is going to become increasingly important. On the cyber side, [aircraft and ships] but particularly submarines [had] an extraordinary system with which to participate in cyberoperations. Those are areas we focused on."

The comments from Admiral Roughead aren't the first time the Navy or their contractors have discussed their plans for wireless cyber operations. David Fulgham has been writing on the topic for years and has a number of articles on the topic. I'd never seen the following article before, where an unnamed contractor says that they are


"developing a weapon system that can deliver cyber-effects through free space into an aperture."

The article does include some on-the-record quotes from Northrop Grumman:


"We have the same core set of engineers on a number of different programs," says Dennis Hayden, director of business development for information operations and electronic attack. "We look at NGJ as the gun and cyber-effects as the bullets. We have the flexibility to go from traditional area-suppression jamming to reactive jamming to a very precise location jamming and cyber-effects."


"NGJ is a complex problem. How it affects your concept of operations and the impact for force mix all gets wrapped together in defining the capability. The more sophisticated the requirement is, the more cyber-effects can come into play," says Falco. The demand for cyber-effects projected at long range is considered inevitable. "Absolutely, that's a given," he notes.

Wired had an article on this in January as well, referencing many of the Aviation Space and Weekly articles and other recent events to conclude it could have a more comprehensive mission (complete with an exaggerated title to draw readers in). ITT's PM points out the versatile capabilities:


“Electronic attack system and concept of electronic attack has really evolved over years,” Palacio told Danger Room. “Initially, it primarily was a system to deal with enemy air defenses. But as you start going forward and realize the electromagnetic spectrum does many things … [so] if you build a system that can generate power and modulation over a very broad RF spectrum, it can be used not only in traditional roles, but in many different roles.”

Lots of speculation and discussion for something still in development, will be interesting to see what comes out at the end.

[March 2012 Update]
A couple of good articles from David Fulghum at Aviation Space and Weekly on NGJ. This article, titled "New Plan: NGJ To Go Unmanned" discusses the movement towards unattended air vehicles (UAVs) to carry the NGJ system. A quote from the Navy:


“That should speak volumes to you,” says Navy Capt. John Green, chief of the AEA and EA-6B Prowler program office. “We believe that the Prowler is the [electronic warfare] past; the Growler is EW now, and the future of EW will be unmanned vehicles.”

Also have an article titled "New EW Capabilities To Emerge With NGJ" that discusses some of the AEA developments and possibile kinetic weapon pairing that might occur.
Posted by Jason Syversen at 11:50 AM