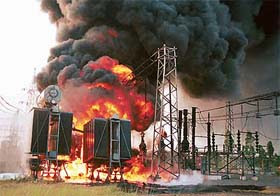 Update: Interesting response to the 60 minutes story (and the Tom Donahue one) where the author's believe it's all rumors, not true, and government motivated power grab. I don't buy the Errata rebuttal (he claims HE could easily bring down the power grid, but obviously all these other times must be false examples) but good reminder that rumors, even told 6+ times are still rumors.
Posted by Jason Syversen at 10:19 AM